Well, it’s been a while. Poor Whitts had been offered many and varied diagnoses for the C.B.F. but had eventually taken matters into her own hands (and feet) and felt that she was match fit. Agreeing that we had all slightly over-egged it last time we had planned a more sedate pace. Managing expectations is a useful marketing phrase that could be employed here… 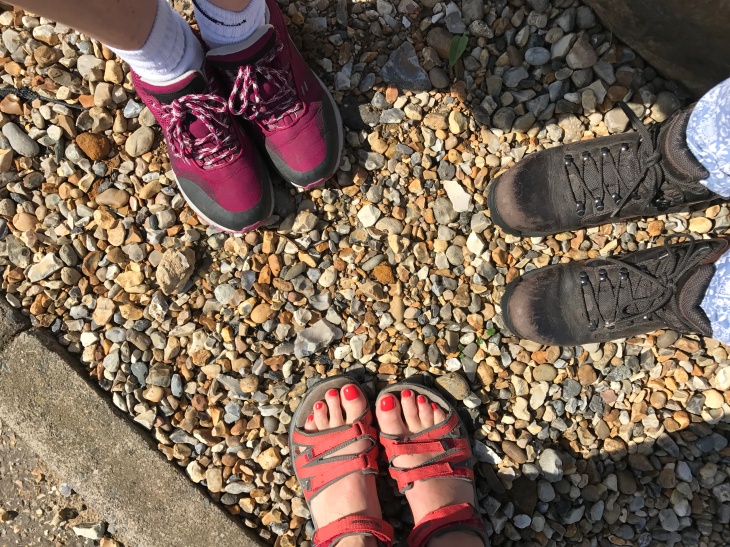 A couple of potential walkers had fallen by the way-side (Rachael-Mary & Mrs T) but we had a new addition to the team in the shape of Mrs Biddle who was dead keen (she’d bought a pac-a-mac for the occasion) and set Whitts up a treat with a reviving coffee at her lovely cafe in Framlingham: The Common Room frequented by celebrities and middle-aged walkers alike. 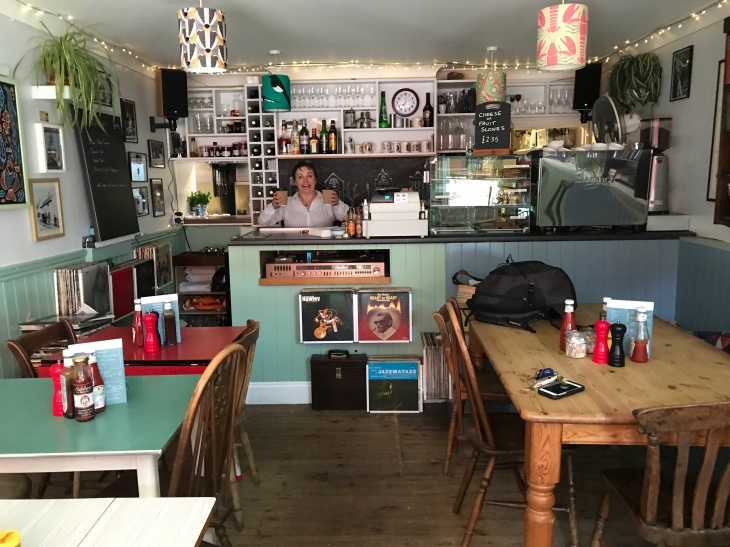 The rendezvous point was the car park of The Ship Hotel, Brancaster. CCTV would have captured three over-excited women of a certain age comparing footwear, eating crisps for breakfast, checking maps and exchanging bin liners full of second-hand clothes in no particular order. The taxi driver waiting to drive us to Wells-next-the-sea was also lucky enough to witness all of the above. 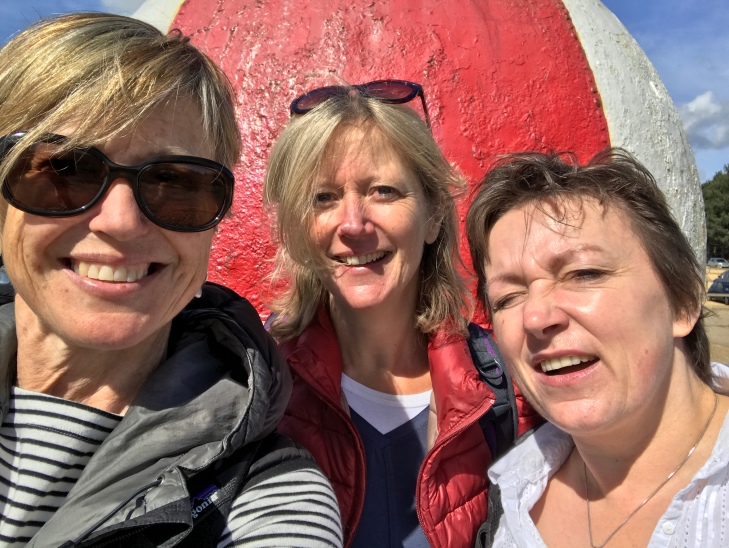 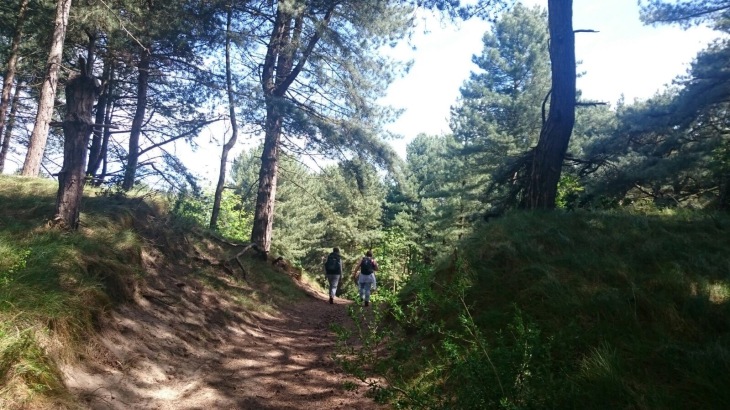 Heading off from the boating lake and through the pine woods of Holkham we spent the first hour or so lamenting recently departed dear friends and discussing other rubbish that loved ones are having to deal with. Mrs B lightened the mood however with possibly the best fart story ever told. 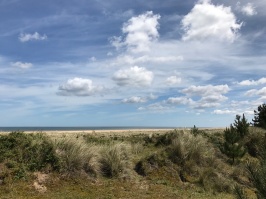 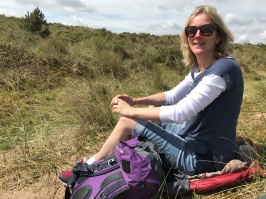 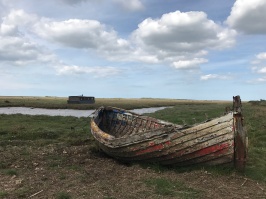 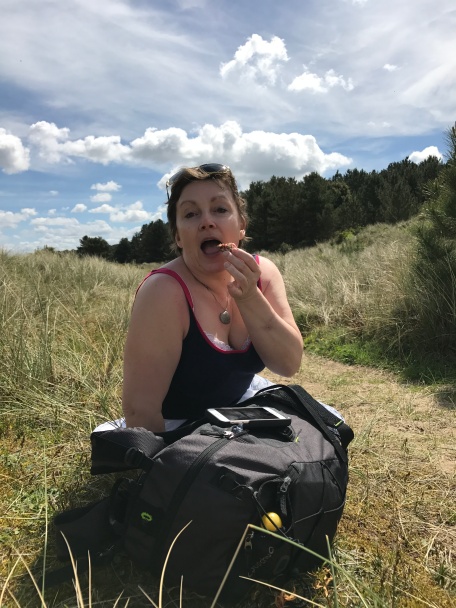 Cutting up through the dunes and out onto the beach we decided a water/energy ball break was in order (don’t ask). It was due to reach 20c today so Mrs B threw caution to the wind and stripped down to her vest – in hindsight this proved to be an error but when has common sense ever got in the way of exhibitionism. Anyway we were far too busy admiring the scenery along this stretch of the coast and heaving a sigh of relief that the naturists were conspicuous by their absence. 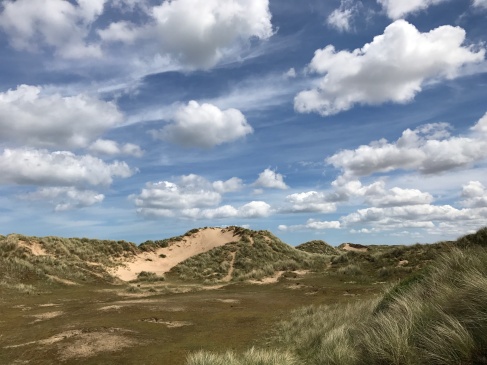 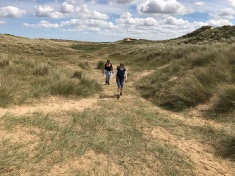 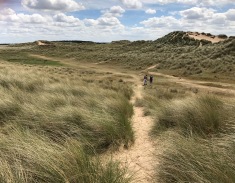 Whitts pointed out that we were frighteningly ahead of schedule so as we headed inland on the boardwalk we decided to have a lengthy lunchbreak at Burnham Overy Staithe overlooking the tiny quay. It was at this point that Mrs B left us in absolutely no doubt whatsover of her views on Falafel but we all decided that tins of Gordon’s Gin and Tonic were right up there with the invention of the wheel and the first steam-powered locomotive. 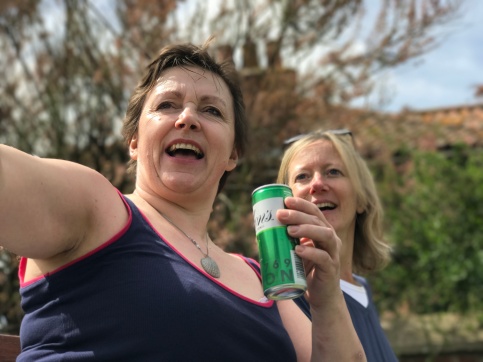 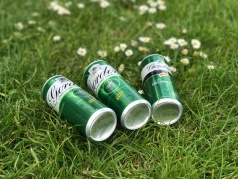 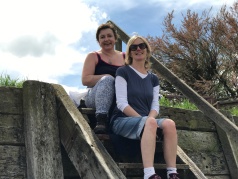 After lunch really did prove to be a gentle saunter. Back out to the coast through the reed marsh that stretches out beyond Burnham Norton stopping only for a brief communal comfort. Sadly this ended up with us losing a) our dignity and b) Mrs Biddle’s reading glasses.

The afternoon did turn into an episode of Springwatch with Mrs Biddle pulling out a pair of binoculars from her bra, Whitts advised us that we had spotted Shell ducks, Little Egrets, Avocets, Herring gulls, Black-headed gulls, a Kestrel, Swallows, House Martins, a pair of Marsh Harriers, something that could’ve been a crane or a heron with something huge in its mouth, Lapwings, Oyster Catchers, a very noisy Moorhen and turns, but I’m pretty sure I only saw a largish duck. We carried on the coast path along Deepdale Marsh and tucked in behind Brancaster Staithe as the temperature began to hot up. We had a view of sails out on the water on our right and people’s back gardens running down to the marsh on our left, I preferred spying into the latter. 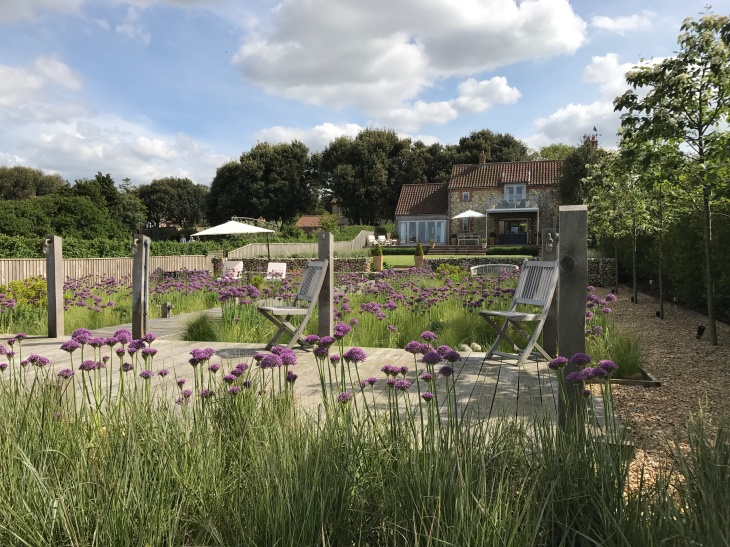 Last stretch now, Brancaster Staithe to Brancaster. Stopping briefly to investigate the roman fort of Branodvnvm (basically just a field) through a very tight gate for women of a certain age with rucksacks on their backs, and to admire Labour H.Q. 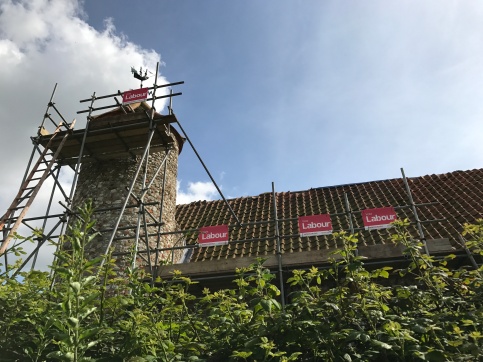 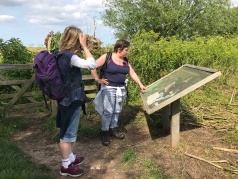 Arriving at The Ship at 4 pm we decided that a bottle of more than luke warm prosecco that had been heating up in the back of my car all day wouldn’t really do the trick. The hard-boiled eggs that had been left behind were frankly a health issue so we cut straight to the chase. 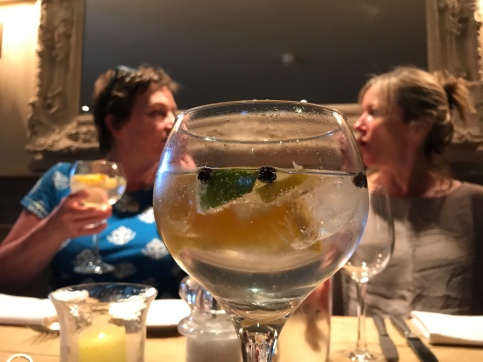 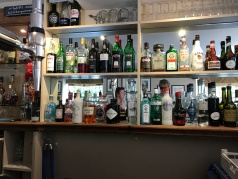 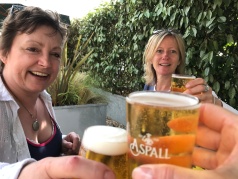 I managed to draw the long straw on the bed front and ended up in the double room. Yes. Whitts and Mrs Biddle were in the twin. After watching ‘Grantchester’ – no sneering, we retired for the night. I managed a whopping 8.5 hours of solid slumber. Whitts and Mrs Biddle managed about 4 hours in total due to the church clock chiming every hour, a touch of sunburn and a strange under floor heating thingy that had turned their room into a furnace. Result. 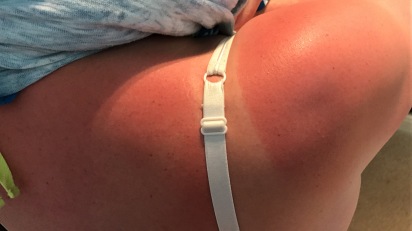 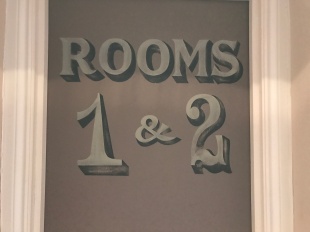